The City With A Broken Heart

The story of Creve Coeur is an interesting one, as the city’s name can be traced back to an old legend regarding a native princess and a broken heart. As the story goes, the princess fell in love with a local french fur trapper, however he did not return her feelings. The princess was so overcome with grief that she tossed herself into the nearby lake, which itself formed into the shape of a broken heart. The city gets its name from the french words Creve Coeur, which translates to “broken heart”.

Compared to other nearby areas , the city stands out for being somewhat diverse, with Whites making up just under 80% of the local population. The next largest demographic is the Asian population, at just over 10%, followed by the Black population, which makes up just over 7% of the city’s inhabitants. The median age of residents is 44.3 years, with about 50% of its residents being married couples, and approximately half of those couples having children. Whether you’re looking to raise a family or start a new life, there’s something for everyone in this St. Louis city.

Education Opportunities For Everyone

Parents of children in Creve Coeur have a number of options for schools available to them, from public to private schools, as well as options to fit specific religious requirements. Please note that students in the eastern portion of the city are served by the Ladue school district, while schools in the western portion are served by the Parkway school district. 66% of Creve Coeur residents end up going on to pursue higher education, and 33% graduate with a Master’s or Doctorate degree.

For more information on the schools mentioned above, click the links below to learn more:

Things to do in Creve Coeur 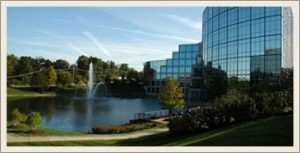 There are 7 parks around the city which make up a total of 95 acres, including Millenium Park, Dr. H. Phillip Venable Memorial Park, Conway Park, and many more. Together, these parks offer numerous walking trails, tennis courts, playgrounds and historic homes. Those looking for a day out will have no problem finding a nearby park to spend their time, catch a breath of fresh air and enjoy the nature around them.

The Dielmann Recreation Complex is another excellent choice for residents looking to get out for the day. The center includes a gymnasium available for hourly rentals, a 9-hole golf course and ice arena. The complex also hosts meeting rooms available for rent, as well as a multipurpose event room for scheduling large scale public events.